New restaurants, cafes and coffee-shops are opening in Moscow weekly. Some of them become popular among sophisticated Moscow public, others close in a few months or so. They should work hard in order to get new and keep existing customers. Every single thing matters: the name of the restaurant to the brand or the tableware.
Restaurant and café sphere becomes more mature especially in Russia and in Moscow. Progress is evident. This Year three Russian restaurants are already in a list of Top-100 world’s best restaurants: White Rabbit, Selfie and Twins.  Chef of the White Rabbit, Vladimir Mukhin is one of the most talented and hard-working people in the sphere of gastronomy. His passion for local and seasonal food  ingredients combined his with diligence and charisma put his flagship restaurant White Rabbit on a 18th place of the rating mentioned above. Vladimir’s enthusiasm resulted in setting up an IKRA festival, first Russian  gastronomic festival aimed to promote Russian cuisine. It is set to be held in the ski resort of Rosa Khutor in the south of Russia where international and Russian chefs made workshops and prepared meals based on local and seasonal ingredients.
If we continue highlighting the theme of food festivals we should mention the Omnivore festival, which has recently taken place in Moscow for the 7th time. Omnivore – is an international gastronomic festival set up in France. The main people of the festival are the young chefs – daring and brave enough to break the stereotypes concerning the gastro dogmas. For several days they boil, fry, stir and make other vivid actions in order to impress guests of the festival and each other. Omnivore festival took place in Paris, NY, Berlin, Sidney , Rio and it was first held in Moscow in 2010, five years earlier then in London.
Just a few days ago Moscow restaurant week event took place in the capital of Russia. The main idea of it is to give an opportunity for the food lovers to get the exquisite dinner or lunch sets consisting of several dishes for a fixed and relatively low price. 55 restaurants in Moscow with 45 outstanding chefs have been working for two weeks. As a result – 20000 guests were happy enough to try the best of Moscow gastronomy. This year the main theme of the event were root-crops and variations. Next year we hope to be impressed by the new  ideas and dishes.
So you can just notice that Russia and Moscow in particular try follow the most Avant-guard gastro trends of the world. We are happy to recognize the progress. 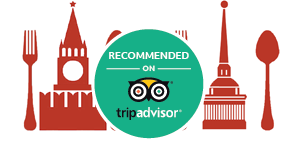